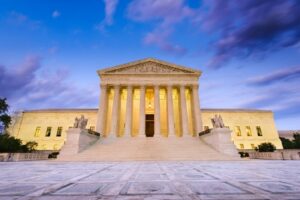 It is rare for the U.S. Supreme Court to agree to consider a legal case in the first place. Nor do the Supreme Court justices always agree on the decision after agreeing to review such a case. But that is exactly what the court did when it unanimously decided in favor of hospitals participating in the 340B drug pricing program on the issue of Medicare payment cuts that have affected many hospitals since 2018.

In its 9-0 decision[1] announced June 15, the Court found the Department of Health and Human Services (HHS) violated federal law when it reduced Medicare payment rates for outpatient drugs to many 340B hospitals by nearly 30% in 2018. HHS said it was adjusting those rates based on an estimate of how much it costs those hospitals to acquire the drugs, which pharmaceutical companies must sell to safety-net hospitals at a discount under federal law. Three national associations – the American Hospital Association, Association of American Medical Colleges, and America’s Essential Hospitals – went to court along with three 340B hospitals claiming the government did not have authority to make the cuts it did in 2018 and again in 2019. The unanimous court agreed that HHS’s cuts were unlawful because the agency failed to conduct a survey of hospitals’ acquisition costs prior to implementing the cuts and returned the case to a lower court.

In a public statement[2], 340B Health President and CEO Maureen Testoni described the decision as “an important victory for the 340B program.” Some affected 340B hospitals had reported being forced to end or cut back important services to patients in need because the Medicare cuts reduced the amount of 340B savings that the hospitals were able to bring in. “We look forward to the next stage of the process involving remedies for hospitals that have been affected by these unlawful cuts,” she added.

High Praise for 340B

In backing 340B hospitals in this dispute, the Supreme Court acknowledged the crucial role that the hospitals play in supporting the health care safety net. Writing for all nine justices, Justice Brett Kavanaugh noted that “340B hospitals perform valuable services for low-income and rural communities but have to rely on limited federal funding for support.” Kavanaugh also cited statements from 340B hospitals that the Medicare cuts “would force those hospitals to eliminate or dramatically curtail other crucial programs that provide a wide range of medical services in low-income and rural communities – such as treatments for cancer, mental health issues, opioid addiction, and diabetes.”

The decision by the high court does not have an immediate effect on how much Medicare pays safety-net hospitals for drugs purchased for Medicare patients. The case involved payment policies in calendar years 2018 and 2019. CMS has subsequently continued the cuts in 2020, 2021, and 2022 while the case was in the courts. The lower court will need to take up the question of how to remedy the damage done to many hospitals by the cuts in 2018 and 2019. Other cases that challenge the 2020 and 2021 cuts are pending and could be affected by the high court’s decision, which establishes controlling precedent on the proper interpretation of the Medicare statute in question.

The decision could have an important impact on what private insurers and pharmacy benefit managers (PBMs) reimburse those hospitals for drug purchases. Following the government action to cut what Medicare paid, some PBMs and payers have begun paying less to hospitals based on their participation in 340B. Hospitals have labeled these practices as discriminatory reimbursement behavior that should be outlawed. The high court decision removes one major precedent for PBMs and payers to cite in continuing to implement these lower rates to 340B hospitals.

As with many such major court decisions, the path forward is complex. Lower courts may need to determine how 340B hospitals should receive remedies for the billions of dollars in Medicare underpayments that have occurred since 2018. Because the decision came in the middle of the year, Medicare officials likely will not adjust payment rates before they have a chance to propose a plan for how they will pay hospitals in 2023.

The Centers for Medicare & Medicaid Services (CMS) is expected in the coming weeks to issue its proposed rules for the Medicare outpatient prospective payment system (OPPS) that will include its plan for paying for 340B drugs. Following a period of public comment, the agency will promulgate final rules later this fall to take effect on Jan. 1, 2023.  In the wake of the Supreme Court decision, all eyes will be on CMS to see if the agency will abandon the cuts, seek to incorporate hospital acquisition cost data to set rates, or take a different path.

In arguing for the abandonment of Medicare cuts to 340B hospitals, hospital associations such as 340B Health also are arguing that payers should not treat safety-net hospitals differently because they receive eligible outpatient prescription drugs at discounted rates. After all, these organizations say, such savings are precisely what Congress intended these hospitals to invest into care for patients in need when it created 340B.

The Court’s decision is a landmark in the 30-year history of 340B. As Justice Kavanaugh wrote, “HHS insists that Congress could not have intended for the agency to ‘overpay’ 340B hospitals for prescription drugs. But when enacting this statute in 2003, Congress was well aware that 340B hospitals paid less for covered prescription drugs. After all, that had been the law for the duration of the 340B program, which began in 1992. In 2003, Congress nonetheless did not see fit to differentiate 340B hospitals from other hospitals when requiring that the reimbursement rates be uniform under option 2.”