March 29, 2010 – Congress has completed action on a sweeping health care reform package without restoring the inpatient expansion of the 340B drug discount program included in earlier versions of the plan.

The bill approved by the U.S. House on March 25 was a companion to the main health care bill that President Obama signed into law on March 23. He is scheduled to sign the second bill tomorrow, March 30.

As The Monitor previously reported, sources say the 340B inpatient extension was removed from the reform bill at the 11th hour as a concession to the powerful drug industry lobby, which opposed 340B’s expansion and whose support was considered critical to the bill’s passage. 340B provider groups say they will continue to work aggressively to pass legislation to extend 340B pricing to the inpatient setting.

Aside from the omission of the inpatient provision, the health care reform bill contains numerous 340B elements, including:

New 340B covered entities. The new law expands 340B eligibility to free-standing children’s hospitals, free-standing cancer hospitals and critical-access hospitals and eases the eligibility requirement for sole community hospitals and rural referral centers. It is unclear at present when these newly eligible institutions actually will be able to enroll in the 340B program. Given the large amount of work the Office of Pharmacy Affairs (OPA) must complete before it can begin taking applications, Monitor sources say a July 1 start date appears to be unlikely.

The law lowers the minimum Medicare disproportionate share (DSH) adjustment percentage required for eligibility in the 340B program to 8 percent for sole community hospitals and rural referral centers in the outpatient setting. Hospitals now in the 340B program that are not designated as sole community hospitals or rural referral centers will continue to be required to meet the 11.75 percent DSH adjustment threshold. In addition, there are approximately 1,000 critical-access hospitals (rural facilities with 25 or fewer beds) that will now be eligible for outpatient discounts, along with 10 free-standing cancer hospitals. Click here to see a list. To qualify, all of these new categories of hospitals must be public or private nonprofit with an indigent-care contract with state or local government.

Likely increase in 340B discounts. The legislation increases the mandatory Medicaid drug rebate percentage on brand-name drugs from 15 percent to 23 percent. 340B provider groups believe this will result in a significant increase in the 340B discount percentage since the 340B price is tied to the Medicaid rebate. Although the average manufacturer price (AMP) is also expected to increase due to a change in the formula, provider groups believe the overall 340B discount should rise for 340B covered entities, resulting in significant savings.

Protects 340B providers when billing Medicaid managed care. Manufacturers are protected under federal law from having to give both 340B discounts and Medicaid rebates on the same drugs. The prohibition against duplicate discounts generally means that covered entities must pass their 340B discounts to Medicaid, by billing their 340B drugs at actual acquisition, to compensate states for the loss of the rebate they otherwise would have been able to collect if the drugs had not been purchased through 340B. However, because drugs covered and paid for by Medicaid managed care organizations (MCOs) are not subject to rebates under the Medicaid drug rebate program, covered entities have been able to bill and collect more favorable reimbursement for their Medicaid MCO drugs.

This important revenue source was placed at risk under health care reform as a result of a bill extending the Medicaid rebate to drugs paid for by Medicaid MCOs. 340B provider groups worked hard to convince Congress to exempt 340B drugs from the expansion of the rebate program to protect the Medicaid MCO revenue source for 340B pharmacies. They were successful. Their requested exemption language was incorporated into the legislation.

Helps seniors in the Medicare Part D donut hole. The health care reform package helps Part D prescription drug plan beneficiaries in the coverage “donut hole” by increasing the 50 percent discount for brand-name drugs that manufacturers had already agreed to pay under an agreement with the White House to 75 percent for both brand-name and generic drugs. The remaining 25 percent of drug costs in the donut hole would be picked up by the beneficiaries. The new law strives to eliminate the Part D coverage gap completely by 2020, but Medicare beneficiaries will receive a $250 rebate this year to help offset costs associated with the donut hole.

The Monitor will report on the new health care reform law in greater depth in coming days. 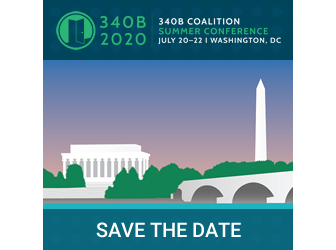 .@Ascensionorg's St. Vincent's Blount Hospital in Alabama is using #340B savings to provide discounts on co-pays, medications, and diabetic test strips to underserved patients in its community. Read the hospital's 340B story here: http://bit.ly/2yMvodi #Protect340B

#NPHW is a great opportunity to celebrate #publichealth programs that safety-net hospitals have implemented using #340B savings. For example, 340B helps @UofUHealth operate the Safe UT App, the official suicide prevention line for the state of Utah. http://bit.ly/2Rn5SFV