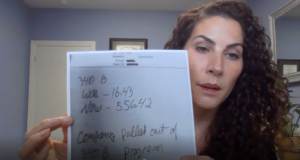 Courtney Riddle’s patient was at a family-owned pharmacy in Magnolia, Ark., where she always picked up her medications, including the diabetes drug Jardiance that was helping to control her blood sugar levels. The patient’s out-of-pocket cost typically was $16.43 for a month’s supply, but this time it was much different. The patient received a note that said that her price for the drug had risen to $556.42 per month because the drug company manufacturing Jardiance had “pulled out of the 340B program.”

Courtney shares this experience, and a copy of the note, in our newest Faces of 340B video profile. She is a family nurse practitioner at Magnolia Regional Medical Center in Magnolia, Ark. When she and her patient found out 340B drug pricing program discounts for Jardiance were being denied to Magnolia and other safety-net hospitals on drugs dispensed at community pharmacies, they quickly had to come up with an alternative. The patient could not afford the drug unless she received the discounted price through the hospital’s 340B community pharmacy partnership. She was running out of her supply of a medication that was preventing her hemoglobin A1C levels from spiking and causing negative health outcomes that could include heart disease, stroke, kidney disease, and vision problems.

“I had to bring the patient into the office,” Courtney said. “We had to try and pick a medication that wasn’t going to interact with her other medications that she was on for her autoimmune issues.”

The patient’s insurance plan often did not cover the medications she needed, and it took extensive time for Courtney to find a different medication that the patient could afford and that would avoid adverse reactions. In the meantime, the patient’s health was at risk because a drug company refused to provide 340B discounts that federal law requires.

Courtney’s patient – and others under her care with similar stories – are not the only ones struggling to access medications because some drug companies are denying 340B discounts to safety-net hospitals and other providers on drugs dispensed at community pharmacies. Eli Lilly and Boehringer Ingelheim, which market Jardiance and many other crucial drugs, are among the eight companies that have restricted these discounts. (For a hospital without an in-house pharmacy, both drugmakers are continuing to provide discounts for drugs dispensed by a single community pharmacy that the hospital designates.) Patients throughout the nation, especially those living with diabetes, have reported similar experiences in the more than a year since Lilly became the first company to start restricting discounted pricing in violation of the 340B law.

Magnolia’s 340B community pharmacy partnership is with a family-owned pharmacy that has been serving its rural community since 1962. Courtney works with the pharmacy to ensure her patients have access to the medications they need at a price they can afford. The partnership also helps ensure patients do not need to travel far to pick up the medications they need to stay healthy.

This access to affordable drugs is important because Magnolia is serving a patient population in need. About 27% of Magnolia’s community lives below the poverty level, which is higher than Arkansas’s statewide average. Many of the patients that the hospital and its rural health clinic care for are uninsured or covered by Medicaid. Arkansas’s Medicaid program only covers a maximum of either three or six medications per month, but many of Courtney’s patients have multiple chronic conditions that require more than that. This is where 340B savings enable the hospital to stretch its resources to help patients fill that gap.

Magnolia also is using its 340B savings to provide more health care services to its community that it otherwise would not be able to fund. The rural health clinic where Courtney works was started using 340B savings after a local health care provider retired and the hospital’s leaders recognized that there would be a shortage of providers in its community. Magnolia also used program savings to launch a psychiatric telehealth service in the emergency department as well as training for ED staff and local law enforcement on how to care for a patient experiencing a mental health emergency.

Three of the eight drug companies denying 340B discounts control more than 90% of the insulin supply in the U.S., and all the companies also manufacture additional drugs critical to managing diabetes. The situation puts many patients at risk for unaffordable drug bills and delays in medication access.

Courtney is deeply concerned that the changes she has had to make to her patients’ prescriptions will result in them experiencing adverse medication reactions and poor health outcomes. She notes that this does not have to be the case if all drug companies were to follow the 340B law.

“I have patients come and sit in my office and cry when I’m able to tell them that they can get their medications, and they can afford them, and they don’t have to give something else up such as groceries,” Courtney said. “It gives them peace of mind that they aren’t going to go without, and you just can’t put a price on that.”

Check out Courtney’s video profile on our Faces of 340B video page.

This post has been updated to include more information about exceptions to 340B pricing restrictions that drug companies are offering to hospitals without in-house pharmacies.

#340B’s ability to support #healthequity efforts is a key reason why @MyABHP is advocating to #Protect340B. Read their statement: http://bit.ly/3dWEXuM

Everyone deserves access to comprehensive, lifesaving care. #340B hospitals are helping more patients who are members of racial/ethnic minorities to receive vital #cancer and other health services. http://bit.ly/32b6sMl #HealthEquity #Protect340B

#340B hospitals have found unique and innovative ways to pursue #healthequity. Hear from several of them on our #340BInsight podcast. http://bit.ly/2Z2Dg7l #MedTwitter